In 1976 the mission bought property outside of Montevideo and built a camp facility – Camp Emmanuel. Camps for children, teens, and families are held each summer with speakers often coming from the USA. During the rest of the year our various churches use the camp for retreats or as a conference ground. EMU also sponsors several camping programs in other regions of the country. 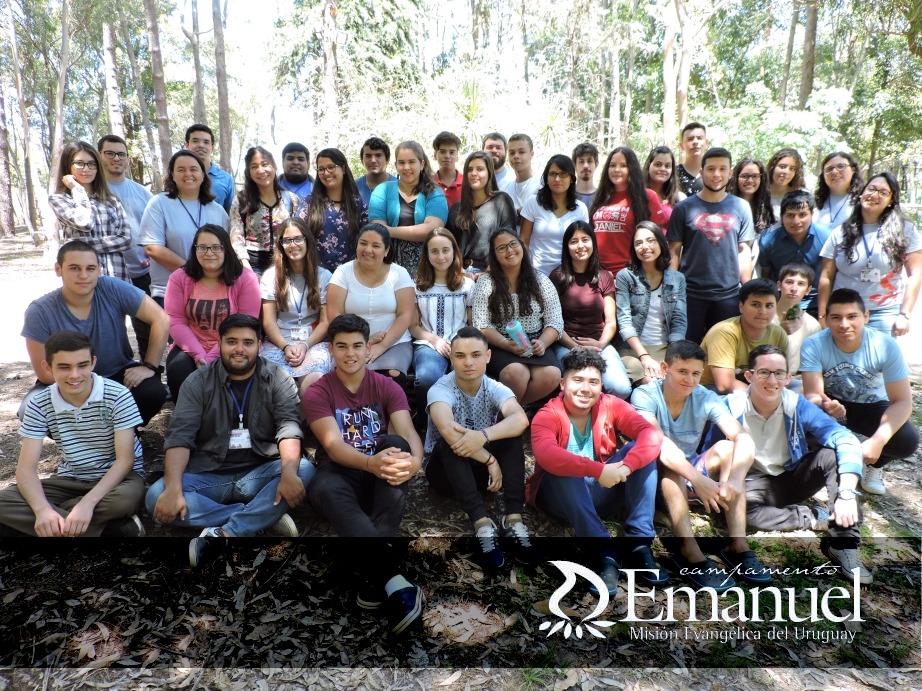 When playing the video below, be sure to click the speaker

icon in order to hear the sound.

How You Can Get Involved 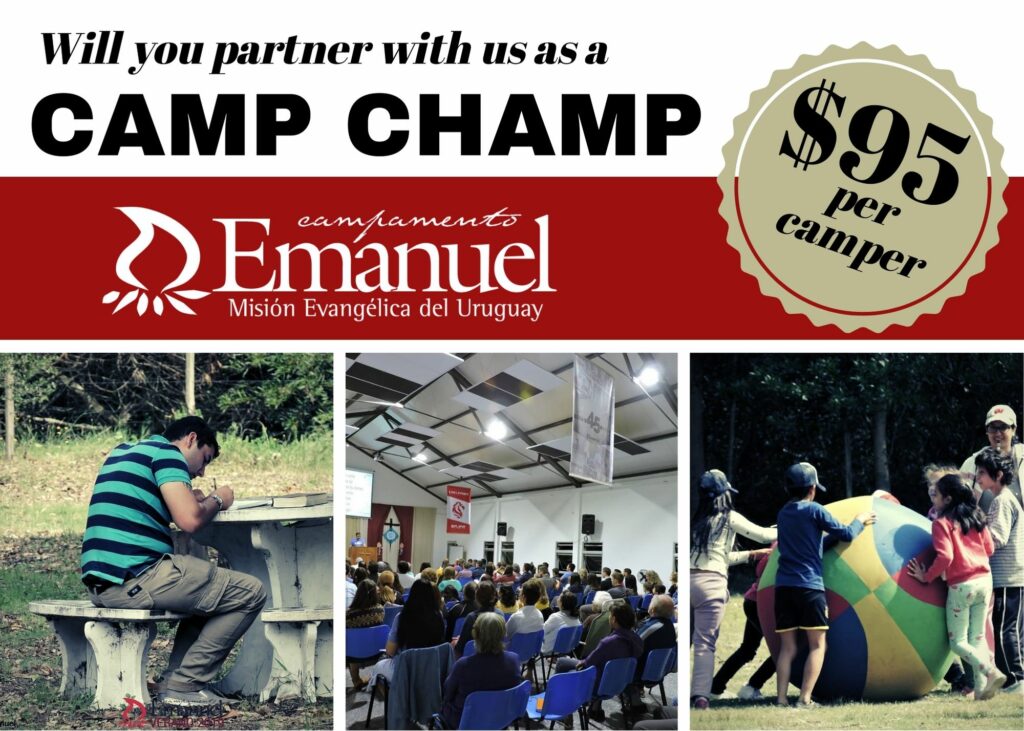 Donations to the Camp Sponsorship Fund are used to either supplement or “pay-in-full” the camper fees for needy children and teens to attend Camp Emmanuel. Over the years hundreds of young people, many who had never been to a Christian camp before, have been able to experience a week of camp and hear the Gospel message for the first time. This Fund also helps pay the camp’s expenses for the counselors, maintenance staff, and kitchen personnel, who are unpaid for their services. For $95, you can sponsor a child, teen, young person, or worker so that they will be able to attend a week of camp. Would you consider sponsoring one or more campers for this camp season? Click here to go to our donation page. 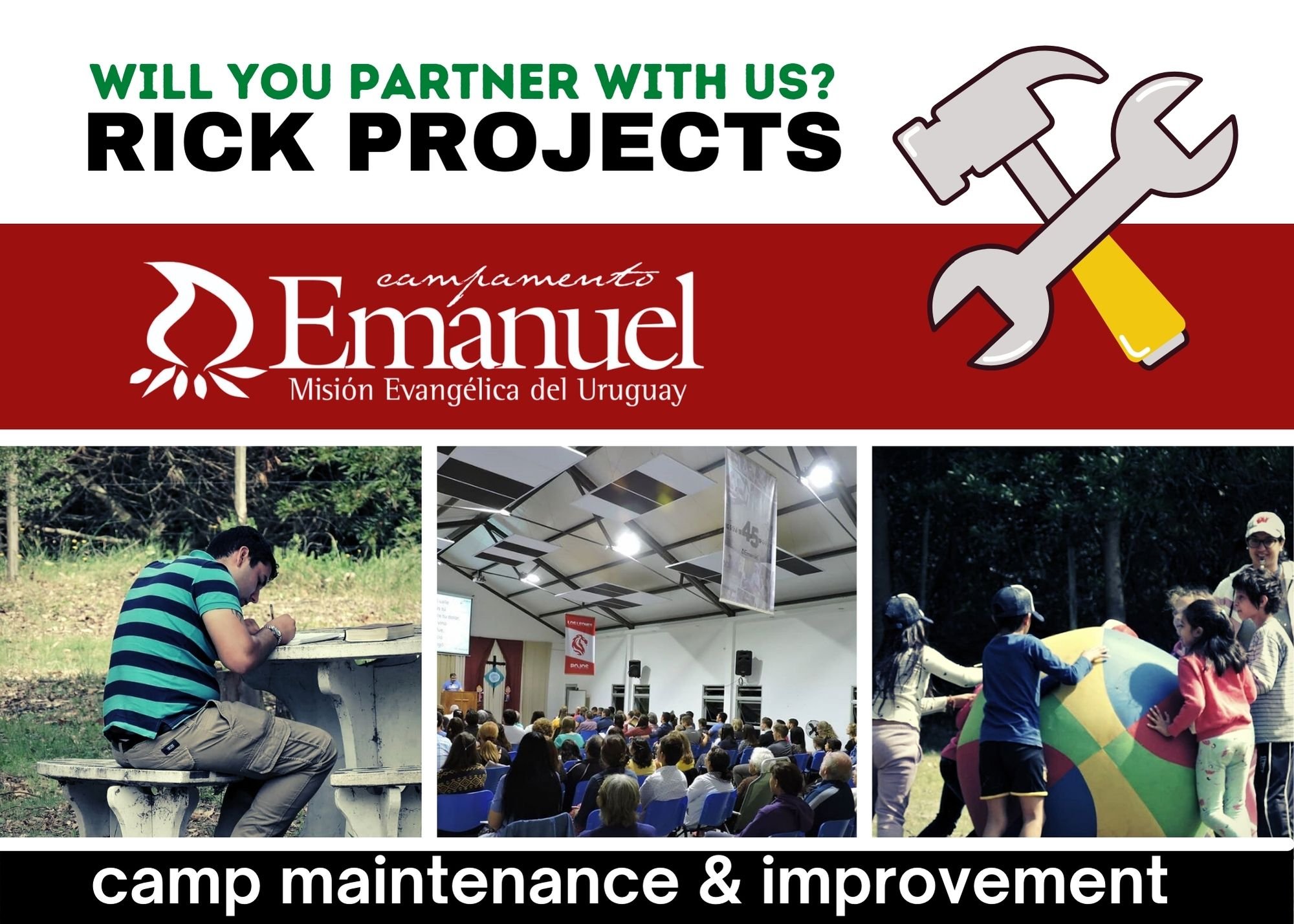 The Rick’s Projects for Camp Emmanuel 2022

Over the past several months, plans have been being made for the upcoming improvements at Camp Emmanuel in Uruguay, traditionally referred to as “Rick’s Projects,” even though Rick Jensen has not been able to take a USA team to Uruguay for over two years because of Covid restrictions. At this writing, it appears that Rick will not be able to go down this year either, though some are still holding out hope that travel regulations will morph to be conducive to his flying down and taking a team with him. However, Jeff Davis, Pedro Donzé, Rick Jensen, and Henry Castro have been reviewing plans for several needs at camp.

Of the 6 proposed projects, the top priority is purchasing and setting up a shipping container on the property for storage. A shipping container placed on blocks can be installed without any additional taxes or approval from the government. A simple concrete block storage shed would incur both taxes and government paperwork, and probably re-approval of the camp’s blueprints. The cost for the container is $5,000.

The second project is to pour “sidewalks” around the cabins, chapel, and casita. These are not actually for the convenience of walking. The camp terrain is very sandy. And though the buildings have foundations on concrete footings, having all the roof water soaking in next to the walls can cause structural damage over time. Also, a sidewalk extending several feet from the outer walls helps protect the integrity of the stucco on the walls. The total cost for the “sidewalks” for these structures is $8,865.

The third need is two-fold: (1) to add bathrooms to the dining room/kitchen building, and (2) to renovate at least two of the cabin bathrooms to make them handicap accessible. Because there have never been public bathrooms at the dining room, when the camp is rented just for a day, the cabins and/or chapel must be left open for bathroom use. Also, the kitchen staff has to use the bathrooms at the staff cabins behind the dining hall. The government has not yet required handicap accessible bathrooms, but several camp visitors have been concerned with the lack thereof. The cost of renovations and new bathrooms at the dining room is $32,500. (In July, winter semester break in Uruguay, one of last year’s Rick’s Projects will be completed – pouring new concrete floors in two of the girls’ cabins. If funds are available, it would be good to renovate the cabin bathrooms for handicap use then.)

The fourth project on the list is the installation of a 6-foot chain-link fence around the entire perimeter of the camp. When Camp Emmanuel was built in 1975, the village of Guazuvirá was not even considered a village. Today it is a good-sized village and is very possibly going to grow much larger in the near future as a huge tract of land next to the camp has been purchased for development purposes. A few decades ago, we added what is called a cow fence around the camp, consisting of 7 strands of plain wire (not barbed wire) attached to wooden posts about 4 feet high. With the large number of people in the area now, especially in the summer months, there has been a problem of “unauthorized” visitors coming onto the campus from every direction. The chain-link fence will add security and funnel visitors through the two main entrances. The fence will also have concrete posts for greater stability and longevity. The cost of the new fence is $28,334.

Project five had some money donated to its completion last year, but not enough. Several more security cameras are needed. The remaining cost is $4,651, which includes installation.

This sixth project, which is a multi-year project, is a little more complicated – and expensive: a multi-purpose complex that is suitable for families’ or children’s and youth camps. Currently, none of our cabins are conducive for family use. The casita, with one bathroom, a small kitchen, and two bedrooms is fine for a family, but it is the only place that is. For many years, Pedro has been asked by prospective renters of the camp whether or not we can accommodate several families. Even at family camps, the campers are divided between males and females for night lodging. Pedro is convinced that we would have many more camp rentals if there were rooms for families. Because the weeks that our EMU churches use the camp are only a few times per year, and the cost is barebones, it is the rental camps that bring in funds to help with the upkeep of the camp year-round. (For rental camps, each camper is charged about 3 times the price of a week of camp for our EMU churches.) Pedro and Henry, after a lot of research, proposed a plan to build a multi-purpose, single-story, structure in 4 phases. (The building would be at the opposite end of the property from the girls’ cabins.)

Phase 1 is site preparation: grading, and installing electrical, water, sewer, and gas lines at a cost of $21,250. The building material would be metal, rather than traditional cinder blocks and concrete. This is because the tax to build a metal building is substantially less than conventional types. The complex would have its own meeting room and a kitchen, though not as large as the current kitchen.

Phase 2 would include a 6-bedroom wing and the meeting room/kitchen. The dorm rooms would sleep 8 people with each room having its own bathroom. The cost of Phase 2 is $195,000. However, if a team from the USA that knew how to work with metal buildings went down, there would be a savings of $40,000.

Some of these projects come with hefty price tags, but we have seen the Lord supply abundantly both in Uruguay and other EMU fields of service. Even if you cannot contribute financially to these needs, please pray that these projects will be funded and that He will lay it on the hearts of many to volunteer their time towards accomplishing these goals. If you have any questions about any of these projects, please let me know.

Click here to go to our Camp Emmanuel donations page. 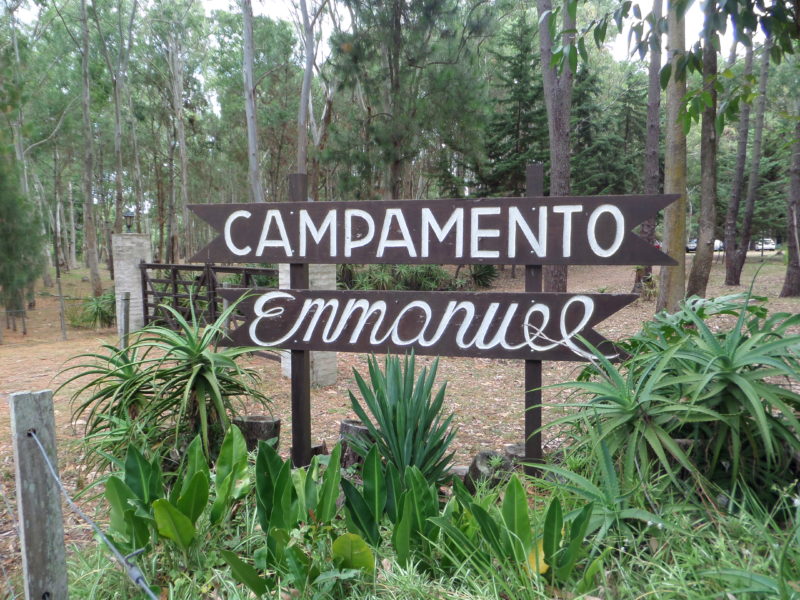