The Uruguayan government is officially non-partisan with regard to religion and supposedly treats all denominations equally, unlike the Roman Catholic-dominated governments of other Latin American countries. Religions of every shade and creed abound in Uruguay—from Moonies to Mennonites, from spiritists to Catholics, from Jehovah’s Witnesses to Baptists. Evangelism, church planting, teaching, and other ministry opportunities abound.

Training the Uruguayan nationals to reach their own people has always been the ultimate goal of EMU International (formerly Evangelical Mission to Uruguay—in Uruguay, EMU is known as MEU, Misión Evangélica del Uruguay). Since the first group of young Uruguayans received instruction and entered the harvest field, they have carried on a ministry of diversified evangelism to reach and disciple people in all walks of life. This work includes mass evangelism through radio, Christian film, open-air meetings in markets and plazas, prison evangelism, child evangelism, house-to-house visitation, tract distribution, hospital ministry, Bible study, and personal work. As a result, a number of Bible-believing churches have been established in Uruguay over the years through EMU’s national missionaries.

Scroll down to see our missionaries in Uruguay. 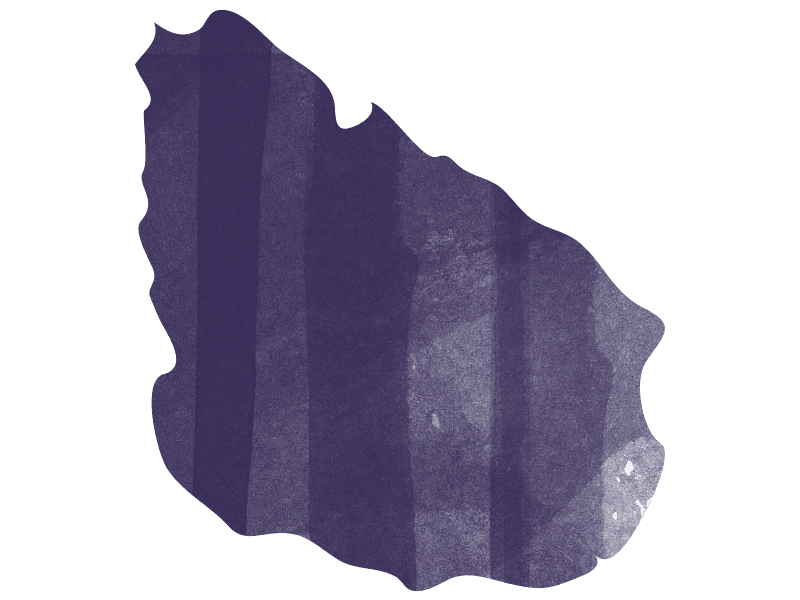 The Bible Institute was founded in 1947, shortly after the Dabolds arrived in Uruguay. This school offers a comprehensive three-year training program incorporating sound doctrinal teaching and personal evangelism experience. Some of the graduates have become EMU missionaries, and some are working in other Spanish speaking countries with other conservative mission organizations. Most of the graduates return to their churches to serve the Lord in their home community.

In 1976 the mission bought property outside of Montevideo and built a camp facility – Camp Emmanuel. Camps for children, teens, and families are held each summer with speakers often coming from the USA. During the rest of the year our various churches use the camp for retreats or as a conference ground. EMU also sponsors several camping programs in other regions of the country. Click here to view more information on how you can partner with us at Camp Emmanuel through the Camper Sponsorship Program, or one of our work teams. 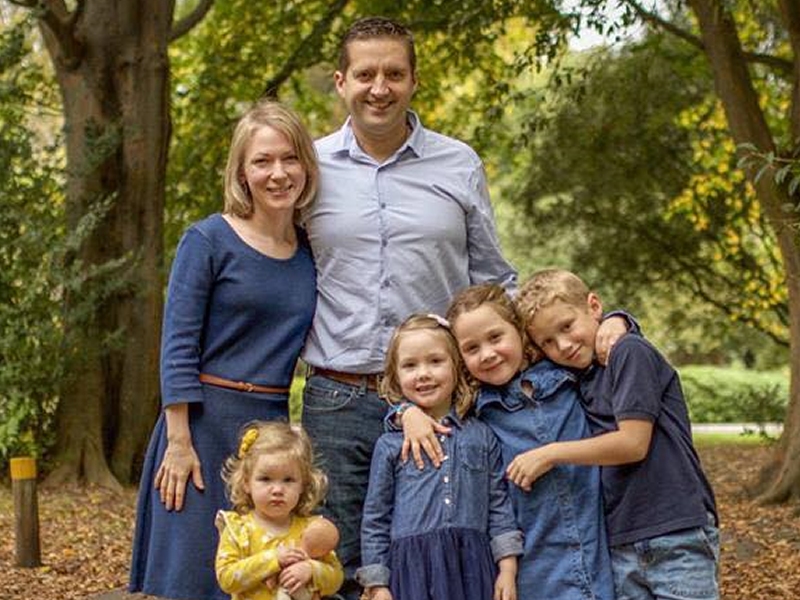 Matías was born and raised in Montevideo, Uruguay, and grew up attending Iglesia Evangélica Siloé, an EMU church. His father passed away when Matías was ten years old, but his mother continued taking the family to church. He came to know the Lord as his Savior a year after his father’s death. Throughout his youth, Matías also attended Camp Emmanuel, EMU’s southern camp. Having sufficiently learned English while in Uruguay, Matías was able to attend Bob Jones University where he majored in financial management.

Kristine was raised in a pastor’s home in Dover, New Jersey. Saved at a very young age, Kristine always had an interest in missions. At the age of eight, after hearing a missionary from Argentina speak in her Christian school chapel, Kristine dedicated her life to missionary service. At BJU she majored in Spanish in order to prepare herself for ministry among Latin Americans, especially in South America. She also traveled with several summer mission teams to Spanish-speaking countries during her time in college. While at BJU, Kristine and Matías met and fell in love. The Lord gradually changed Matías’ focus from business to full-time ministry in Uruguay. Matías and Kristine were married in 2004.

To further prepare themselves for teaching ministry, both continued their formal education at BJU. Kristine earned an M.A. in Bible, and Matías acquired an M.A. in Pastoral Studies and a Master of Divinity. Throughout their schooling at BJU, Matías and Kristine were very involved in Spanish ministries in Greenville. Matías was able to be an interpreter for visiting speakers at Spanish churches, and Kristine, who taught Spanish at BJU, helped with material translation. After graduation, BJU asked the Espinels to travel with one of the university’s USA musical teams for a year. Matías was the preacher for this team.

The Espinels entered the EMU family of missionaries in June 2009. They began their first term of ministry in Uruguay in January 2012. Matias’ primary goal for ministry in Uruguay is to help establish a 4-year Bible College. After two years of planning and working toward that goal, F.E.B.U. opened it doors for its first semester of classes in March 2014. Matias is the director of the college and also teaches in the school. He and Kristine are also involved in other aspects of EMU’s ministries in Uruguay.

If you would like to know more about the Espinels and their ministry, contact the Home Office and request to receive their update letters. 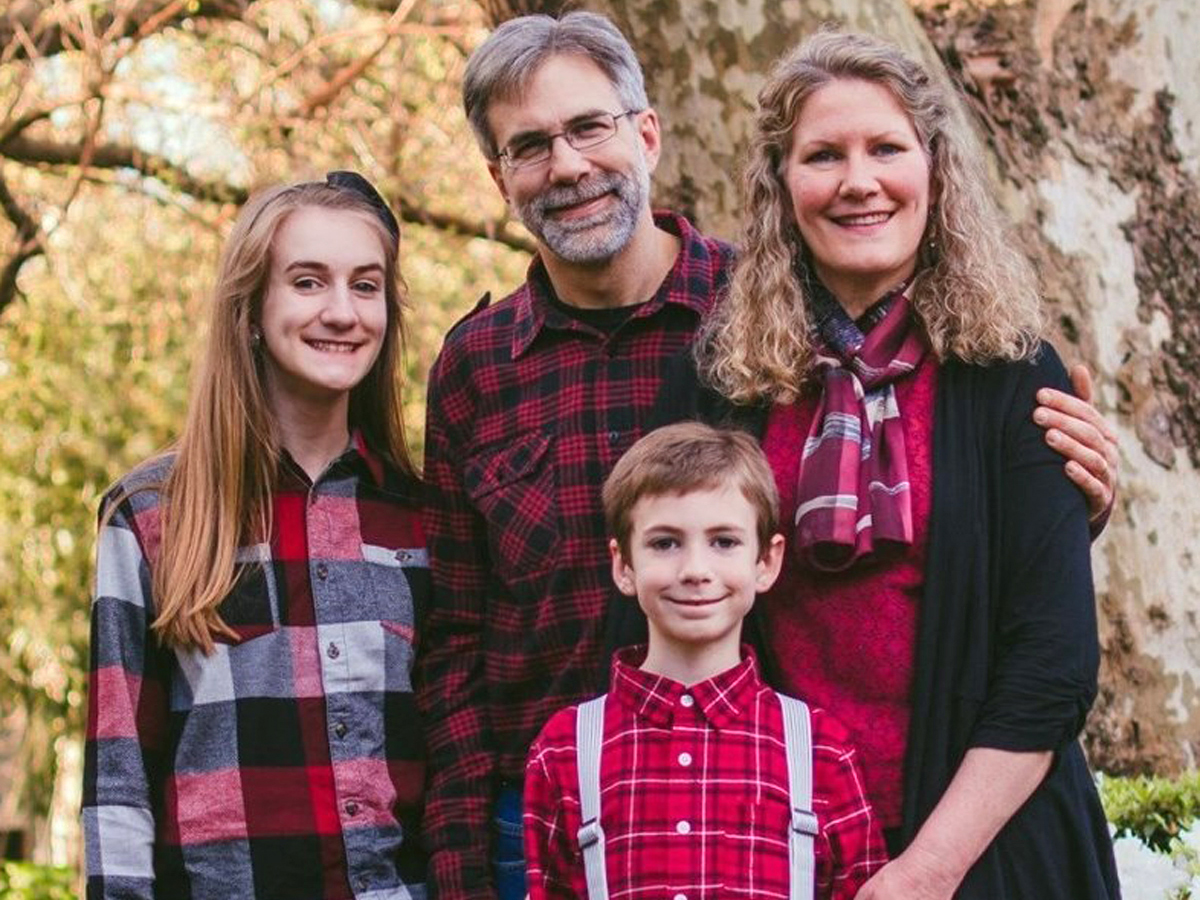 John Mark and Deborah are products of missionary families serving in the Western Hemisphere. When John Mark was in the eighth grade, his parents moved their family from Indiana to the island of Antigua where his father worked with a Christian missionary radio station. It was there that John Mark began taking Spanish in a cultural program sponsored by the Venezuelan government. Three years later the family moved to Provo, UT, for another assignment. During his years at Bob Jones University, John Mark’s desire to serve the Lord in full-time ministry grew. During his senior year, he joined a Christmas mission team to Uruguay. One of the organizers of the team was a recent graduate of BJU who had grown up as an MK in Uruguay, Deborah Garwood.

Deborah’s family moved to Uruguay when she was very young. Though her parents were with another mission organization, the family had close fellowship with EMU missionaries. Deborah and her younger brother and older sister grew up attending Camp Emmanuel in Uruguay. It was at this camp that Deborah, at the age of sixteen, heard George Jensen’s message on David Livingstone and surrendered her life to missionary service. After having graduated from BJU in 1995 with a B.A. in French/Spanish and ESL, Deborah worked on staff at BJU during which time her relationship with John Mark developed. They were married in 1999. Subsequent short-term mission trips to Mexico, Spain, and Uruguay helped to direct their attention to Uruguay. In the meantime, John Mark earned an M.A. in Church Music and a Master of Divinity. John Mark and Deborah spent many years helping with various Spanish ministries in the Greenville area. They were accepted as missionary candidates with EMU in December 2008. They moved to Uruguay in the summer of 2013.

The Steels were able to get involved immediately with the various ministries in Uruguay because they were already fluent in Spanish. One of John Mark’s primary ministry goals in Uruguay was to help in the establishment, leadership, and teaching in Uruguay’s first 4-year Bible College, which goes by the name F.E.B.U. FEBU officially opened in March of 2014. John Mark and Deborah both teach part-time in the school. He currently serves as director of the M.E.U. Bible Institute. They are also involved in other ministries as well.

If you would like to know more about the Steels and their ministry, you can visit their blog, Good News From a Distant Land, where they post ministry updates. 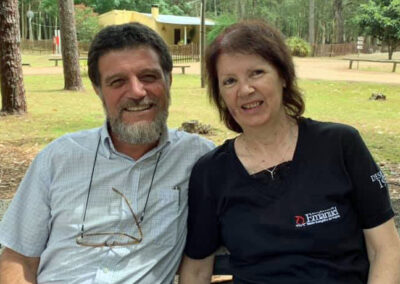 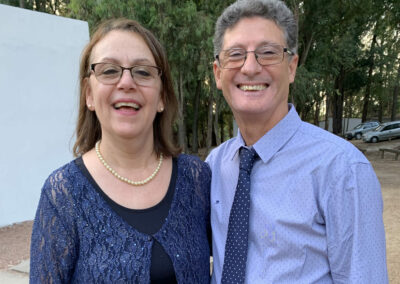 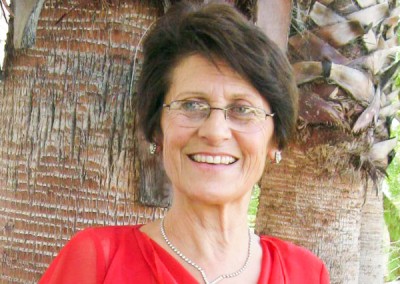 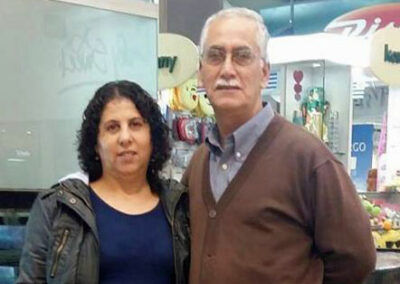 Pastor of Calvary Temple in Rivera 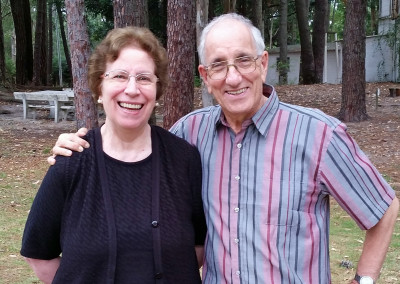 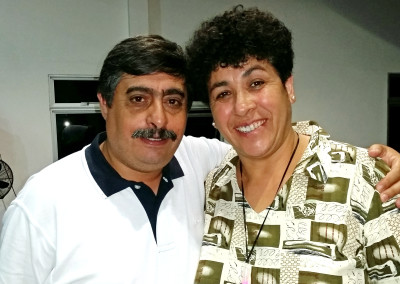 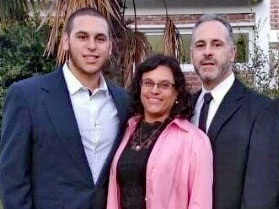 Pastor of Gethsemani Church in Montevideo 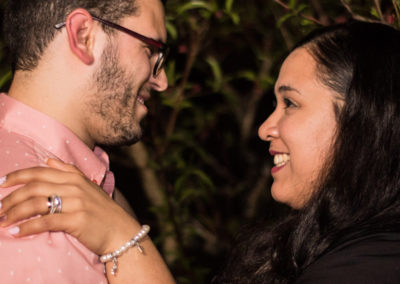 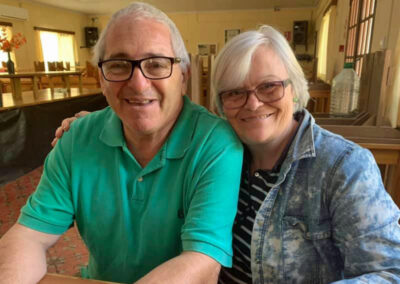 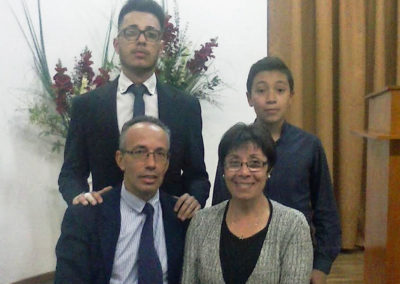 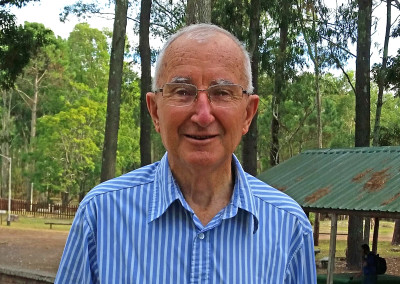 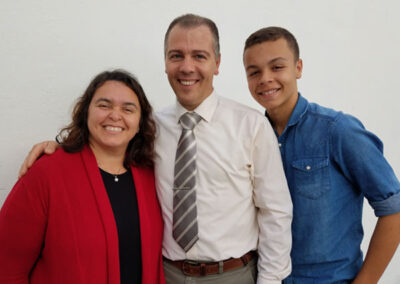 Pastor of Calvary Temple in Montevideo 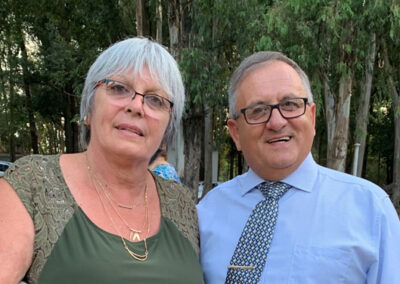 Pastor of Bethel Church in Pando 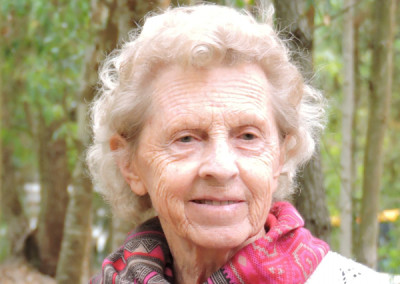 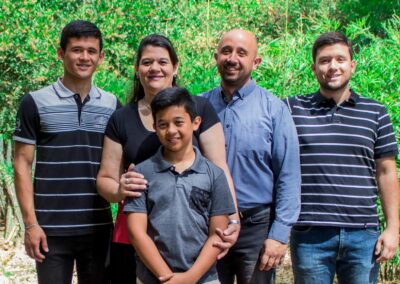 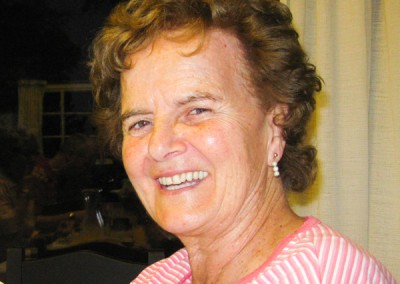 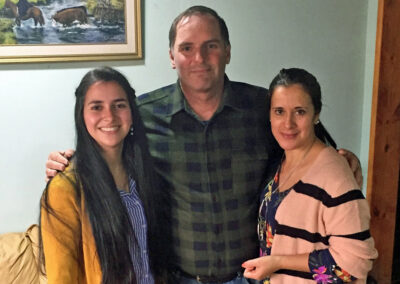 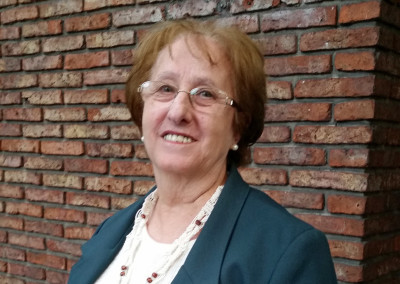 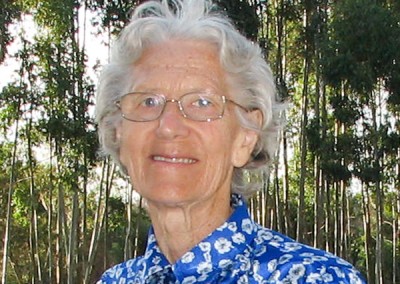 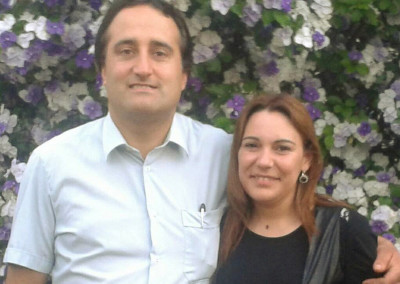 Pastor of Calvary Temple of Vergara